Sky’s the Limit for These Ambitious Youth 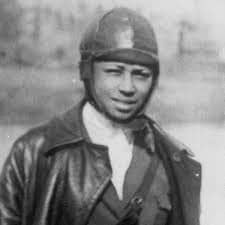 “The air is the only place free from prejudice.” Bessie Coleman was a trailblazer, leading the way for Blacks and women in aviation.

Margena Wade-Green, CareerBridge Program Director, has a keen eye and unbridled enthusiasm for untapped opportunities. It materialized this past summer as a unique aviation internship in which nine of our CareerBridge Academy students participated.

For the past five years, CareerBridge has partnered with Oakland International Airport in the Oakland Aviation Day (OAD), sponsored by the FAA. The field day at the airport is designed to open the world of aviation careers to students. While preparing for this year’s event, Margena met Gigi Coleman Brooms, the great-grandniece of aviation pioneer Bessie Coleman, and the CEO and founder of the Bessie Coleman Aviation Allstars. Ms. Coleman was in Oakland performing her re-enactment of Bessie Coleman and raising awareness of the foundation’s aviation scholarship program. Before long, the two enthusiastic women agreed to partner on a summer aviation internship.

“I decided blacks should not have to experience the difficulties I had faced, so I decided to open a flying school and teach other black women to fly.” — Bessie Coleman, aviation pioneer

They developed a hands-on program that allowed students to explore the many career opportunities within the aviation field while also preparing them to receive an FAA license to fly drone aircraft. Destiny Lucious, a junior in high school who is currently homeschooled, participated in the internship. Although she has ambitions to become an attorney, Destiny was eager to enroll in the aviation internship program. 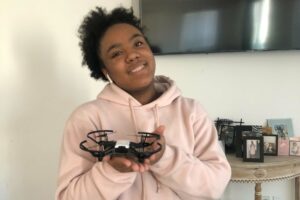 Your support of CareerBridge has allowed Destiny to explore legal careers in aviation, and receive an FAA license to fly a drone aircraft.

“It was interesting to see all of the opportunities in aviation,” Destiny said. “Since I already plan to go to law school, law was one of the areas that was of interest to me. I was actually surprised by how many legal jobs there were in aviation.” Destiny is especially interested in the attorneys who investigate accidents and thinks she may want to explore that as an option.

This year we celebrate the 100th anniversary of Bessie Coleman becoming the first Black woman in America to receive a pilot license. Having overcome race and gender discrimination in the early years of aviation, Bessie Coleman has been an inspiration to aspiring pilots. “I refused to take no for an answer,” she boldly declared a century ago.

Ms. Coleman and Ms. Wade-Green are all about opportunities and would love to see ambitious young ladies like Destiny pursue a career in aviation. “Great-aunt Bessie had wanted to start an aviation school, and this was a way to continue that dream,” Ms. Coleman said. “I love working with students to pursue scholarships and careers in aviation, or to receive their drone license so they can start a business in the industry, or anything they want to pursue in life.”

YES, I CAN empower a child to build bridges to a better future!

I want to learn more about online reading or math clinics to see if tutoring is right for me!